ACUPRESSURE
An Ancient Healing Art developed in China over 5,000 years ago, using the fingers to press key points on meridians across the surface of the skin to activate the body’s natural self-curative abilities. 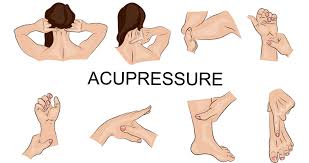 When these points are pressed, they release muscular tension (including emotional trauma) and promote the circulation of blood and the body’s life force energy (Qi) to maintain radiant health and well being. Acupressure, which is a gentle offshoot from Acupuncture, uses the same points as Acupuncture and Traditional Chinese Medicine.
This traditional form of healing aims to treat the person rather than just relieving the symptoms and works in harmony with the principles of the Five Elements: Wood, Fire, Earth, Metal and Water and the balancing of the Yin and Yang forces in the vital organs.
“In their ceaseless successions the two elements of yin and yang constitute the great principles of the universe.” ~ Zhang Zai
Acupressure can cure or relieve a wide range of illnesses which include: Insomnia, Migraine, Asthma, Heart disease, High blood pressure, Circulatory disorders, Hypertension, PMS, Tinnitus, Impotence/Infertility, Addictions (such as smoking and alcoholism) Back/Arm/Shoulder/Leg pain, Diabetes, Bed-wetting, Digestive disorders, Fatigue and many other conditions which are rooted in problems caused by blockage or hyperactivity of the bodies vital energy (Qi).
Yin and Yang: describe two primal opposing but complementary forces found in all things in the universe. Yin, the darker element, is passive, dark, feminine, downward-seeking, and corresponds to the night; yang, the brighter element, is active, light, masculine, upward-seeking and corresponds to the day. Yin and yang are complementary opposites rather than absolutes. Most forces in nature can be broken down into its respective yin and yang states, and the two are in constant motion rather than held in absolute stasis.